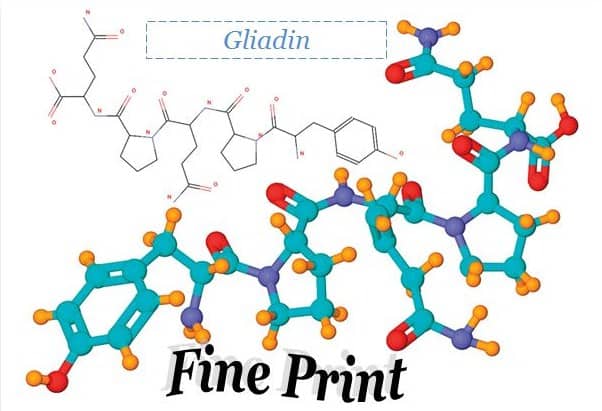 Gluten is not one protein. It is a complex mixture of several hundred individual proteins- primarily glutelins and prolamines. In the most sensitive ELISA test the R5 antibody detects the amount of prolamin fraction of gluten. The detected amount is then multiplied by two to get the final gluten content. This is because the Codex Alimentarius states that the prolamin content is usually 50% of total gluten. More specifically, prolamines in gluten-containing grains are bound to glutelins in a 1 to 1 ratio (and this makes up gluten). OK, why is the prolamin fraction tested for specifically? It is because certain types of prolamines cause a reaction for people with Celiac Disease. That?s right. There are multiple types of prolamines but only certain ones cause a reaction. All squares are rectangles, not all rectangles are squares. Think of all reaction causing prolamines as squares. The reaction causing prolamines squares of protein come from certain geniuses of the grass tribe Triticeae including Triticum (wheat), Secale (rye),? Hordeum (barley). Whew. Back to the testing method, the most sensitive ELISA testing for gluten (prolamines) is the competitive version, which only requires one epitope and is, thus, suitable for detecting smaller-sized protein fragments AKA fragments that have been hydrolyzed/heat-treated/fermented/brewed/ etcetera. The caveat- no one is certain all the toxic peptides that can cause a reaction in the human body have been identified. According to researchers, peoples? responses differs according to the type of gluten sensitivity and are dependent on the genetic makeup of the human leukocyte antigen genes. Three dominant sequences responsible for the antibody reaction have been identified, but not all. Our bodies are extremely intricate and complex and there is a ton of information left to be discovered on this topic.

In closing, we wanted to let you all know of what happened this week: The TTB upheld their ruling on gluten-free labeling of alcoholic beverages to include only products that are made from non gluten containing grains.

TTB will continue to consider ?gluten-free? label claims for alcohol beverages that are made from gluten-containing grains to be misleading to consumers who are seeking to avoid the consumption of gluten for health reasons

What do you think about this ruling?