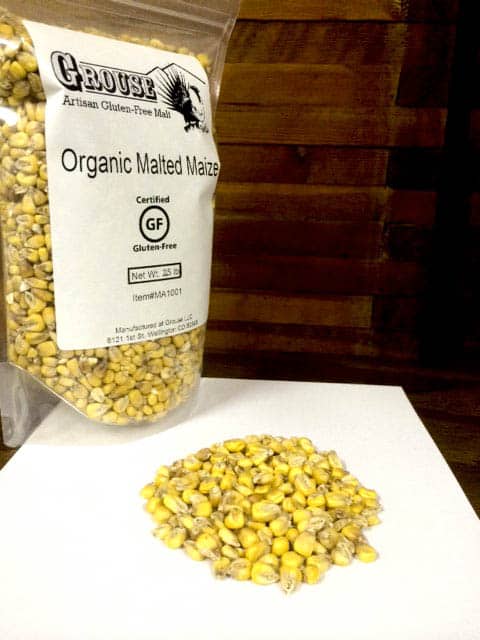 Brewing with corn is truly American. Before the arrival of Europeans to the New World, Native American tribes had been producing a few types of corn beer, including Chicha and Tiswin. When Europeans established colonies in North America, they found that the six-row barley that grew here had a much harsher taste than the two-row barley they were accustomed to. It also had a higher protein content that lent an undesirable haziness to their beers. Taking a hint from the natives, the colonial brewers tried using corn to supplement the sugar source. To their surprise, the six-row barley converted the corn starches into sugar very efficiently and the corn added many favorable qualities to the finished beers. The beers were clear again and the harsh taste of brewing with only six-row was replaced with a refreshing sweet approach and a dry finish. American colonists much preferred these lighter, smoother beers.

With increased passage across the Atlantic, trading of commodities with Europe increased as well, and American brewers were able to buy two-row barley and the use of corn dwindled a little. This was until WWII when the cost of barley increased and breweries once again turned to trusted corn to replace the shortage of barley. Brewers would use up to 50% corn to keep the cost of their beer down, which also started to revive the palatable and smooth light ales and lagers that had once been the staple American beers.

With the passage of the 18th Amendment (the start of Prohibition), many turned to producing illegal hard alcohol, as it was much easier to store, transport, and one needed to consume less to achieve the same results as drinking many beers. Corn whisky was produced in greater quantity than barley whiskies because a corn harvest yields much more than the same acreage of sowed barley. Farmers generally had an excess of corn; after feeding the livestock, filling the year?s rations, and selling as much as they could to market. With this excess, they turned to producing corn whisky, which also sold for a much greater price than the corn that went into its production, plus the waste mash could still be used for animal feed. How economic! They also found that charring the inside of the barrel before aging the corn whisky added a pleasant smokiness; thus birthing Bourbon, America?s Liquor! To this day bourbon must be made with no less than 80% corn.

We at Grouse are proud to announce our newest gluten-free malt product, malted maize, produced from dent-corn, also known as field corn. Unlike using flaked maize, our maize malts are produced at varying levels of kilning to achieve more complex flavor profiles and are able to self-convert their starch reserves. They can still be used to help achieve lighter body beers, but we have been working with local distilleries who have developed amazing malted maize bourbons and whiskies.

We raise a pint, or shot glass, to a very American brewing and distilling ingredient. To Maize!