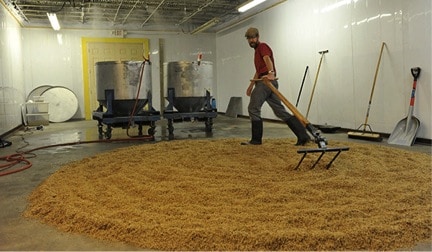 Malting is not a new revolution by any means. Hops and malt production were?centralized to the mid and western parts of North America in the 19th century. Before?prohibition, a multitude of small malt houses existed across the United States. For?example, up until 1916 a Boulder Colorado company called Weisenhorn and Voegtle?produced over 260 tons of malt per year. During the prohibition era, malt houses were not?able to find alternative sources of revenues and most had to close their doors. When?prohibition ended, the malt houses that survived monopolized the industry. Today, the?majority of malt is produced by only a handful of companies, but because of the growing?popularity of micro and craft-brewing and desire for local ingredients, small scale malt?houses are reemerging. This monopolization of the malting industry is very similar to that?of the brewing industry before the micro or craft-brewing boom in the 1980s.

The future for craft malting and craft beer is bright and the North American Craft Malting?Guild is here to serve both farmer and brewer. Craft maltsters make a positive impact in?local communities and bridge the gap between the field and kettle. They also support the?craft beer community by offering artisan products.

Craft malt is not just barley. Around the country, craft maltsters are sprouting up grains aplenty.?Seeds including heritage varieties of barley to corn, rice, rye, wheat, millet,?buckwheat and everything in between can be malted and transformed into kernels filled?with natural sweetness and potential. When you brew beer remember, there are many,?possibly endless options to choose from, and by hand selecting craft malt we have the?opportunity to brew up more unique creations than ever before.

To date, the North American Craft Maltsters Guild is composed of 17 craft malting?companies as regular members. Anyone with an interest in grain, malting, or craft beer is?encouraged to join as an associate member.

Is there a malting company near you?