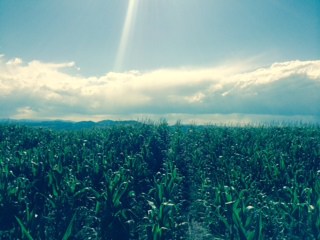 Would we be alive today if our country?s ancestors did not have roots in it? The native population gifted the cultural practice of growing maize to us long ago. It could even be argued this Nation was built upon a single grain, Maize.?Maize. A gluten-free grain.?You might know this grain as corn. But, outside of North America, Australia, and New Zealand it is called maize. Why so? According to our sources: When the English settlers landed in the New World, they didn’t have a word for maize. The settlers called it “Indian corn”, which soon got shortened to just “corn”. However, maize is the preferred term in formal, scientific, and international usage as it refers specifically to this one grain, unlike corn, which has a complex variety of meanings that vary by context and geographic region. Corn has been grown since around 2500 BC in the Americas and spread wildly around the world because of its ability to grow in diverse climates.

Maize is the most widely grown grain crop throughout the Americas,with 332 million metric tons grown annually in the United States alone. Approximately 40% of the crop?130 million tons?is used for corn ethanol.Genetically modified maize (GMO) maize made up 85% of the maize planted in the United States in 2009. It is rather sad that this heirloom crop has been so heavily exploited and subsidized.

This leads us briefly to another hot topic surrounding this industry: an insurgency for clarity and simplicity regarding alcoholic beverages. We recently read an article bringing to light the little known but definitely not hidden secrets behind the distilling industry. The article is titled “Your ?Craft? Rye Whiskey Is Probably From a Factory Distillery in Indiana”. The long story short, ?Distributors advertise phoney bolognese, pulling hype off popular industry terms. As craft malster’s, we’re here to educate consumers and bring some?transparency back to the industry.

Grouse Malting & Roasting is?in the process of leading?the alcohol industry towards knowing the field each glass of spirit originated from. We were out scouting the fields earlier this week with farmer Greg who gave us a peek at his rows of maize we?ll be malting soon. That?s right, Grouse is malting and milling corn for a small distillery that is truly making unique and delicious products, from grain to glass!

What else should we be malting?